It’s 5am on a cold October morning, the alarm rudely awakens me from my slumbers.  The heating hasn’t come on yet so the house feels cold.  I get ready quickly and head downstairs to where my heavy kit bag awaits me.  A final check: Camera body, lenses, memory cards, batteries, tripod, waterproof boots, jacket, gloves, scarf, hat.  Yes, everything is there.  I hear my friend’s car pull onto the drive so we load up and head off to Richmond Park.

The sky is clear so every time we pass an open area of grassland we peer hopefully through the darkness – will there be any mist today?  It’s only about 15 miles but the journey is slow, roads clogged with commuters heading into London.  After an hour we pull up outside the gates of the park and flash our lights in the direction of the car parked in front of us.  The driver waves back in acknowledgement and we get out and greet them, standing in the road talking quietly, looking eagerly towards the locked gates beyond which the mist hangs eerily over the park.  After a short while we spot vehicle headlights and the groundsmen arrive to open up the park gates.

We drive slowly round to Pembroke Lodge car park, pleased to see we’re the first photographers there.  We quickly unpack our gear, put on our weatherproof outer layers and head off across the fields.  The mist is thick and it’s hard to see more than a few feet in front of you.  A loud bellow penetrates the wall of fog.  It sets our pulses racing, reminding us that even in a Royal Park these deer are still wild animals capable of inflicting serious damage on unwary photographers. 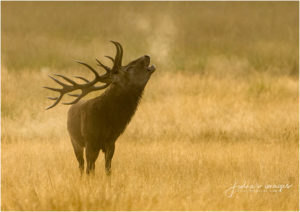 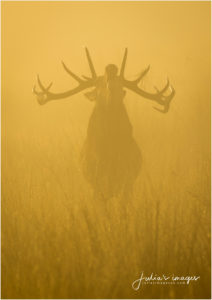 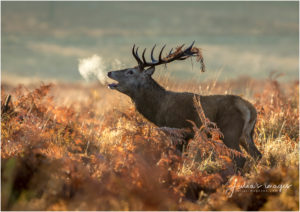 Eventually the mist lifts but, on this occasion, too late for those glorious, backlit, sunrise shots.  Nevertheless a couple of hours later we have a good selection of shots in the bag. 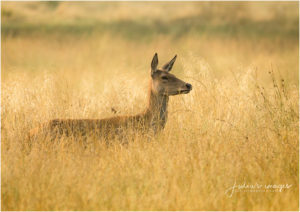 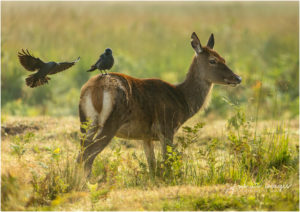 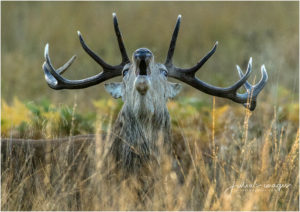 Of course, early morning in Richmond park is not just about deer and photographers.  Keen runners and dog walkers take time out to enjoy the morning beauty of one of London’s special parks.  Kestrels can been seen perched, on the lookout for prey and spiders have been busy spinning their webs overnight. 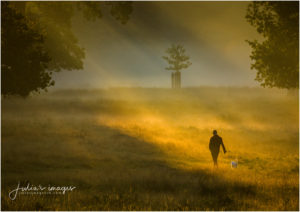 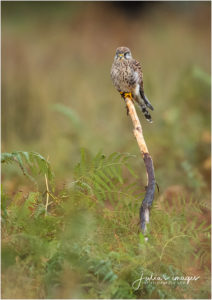 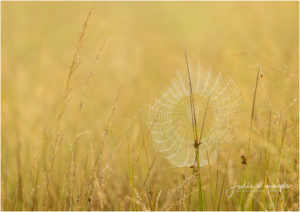 By 9.30am the light is getting too harsh so it’s time to head back to the lodge cafe for breakfast, where the bacon rolls are to be recommended.  Prompted by the sound of deer calling, an unplanned detour provides the hoped for opportunity to photograph a Stag dressed to impress in a fine display of headgear.

Photography session over for the day we sit on one of the benches chatting, enjoying the sunshine and watching the park begin to fill with people going about their everyday lives, walking dogs, exercising or just enjoying the sun.  It feels like a very different world to the one we joined a few hours ago.

‘Fancy another coffee?’, asks one of my friends.  ‘Sounds a good idea to me’.  Stags, bacon and coffee with friends – what a way to start the day. 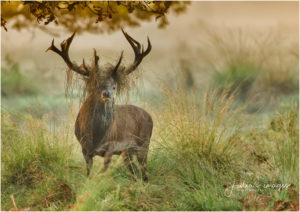 Richmond Park is the largest Royal Park in London covering an area of 2,500 acres.  In 1625 Charles I brought his court to Richmond Palace to escape the plague in London and turned the area into a park for red and fallow deer.

It is now a National Nature Reserve, London’s largest Site of Special Scientific Interest and a European Special Area of Conservation where herds of wild deer roam freely.

During the autumn the deer ‘rut’ (breeding season) takes place.  The Red stags and Fallow bucks compete for females (known as hinds and does respectively).  At this time, the large males roar, bark and clash antlers in a spectacular way in an attempt to fight off rivals and attract as many females as possible.