Our guide looked around anxiously.  More accustomed to showing tourists around temples and cities he seemed uncertain as to how best manage the situation unfolding before him: one religious monument, two totally absorbed photographers, over 100 free roaming crab-eating macaques and a large stick that he had been given to ward off the monkeys when they got too close.

It was early in the month of November and we had arrived in the old quarter of Lopburi, also known as ‘Monkey City’, around 3 hours drive north of Bangkok.  Dating back to the 6th Century it is one of Thailand’s oldest cities and decayed palaces and temples from the Khmer and Ayuthaya empires are dotted around.

Perched on monuments, with no regard for their historic value, numerous macaques watch the world go by.  Along roadsides they sit, waiting patiently for a break in the traffic so they can cross to the other side.  Balconies and shop fronts have been barricaded up by their owners.

Any stationary vehicle is a target for a surprise raid.  For the local people the presence of macaques in the town is just a part of everyday life. 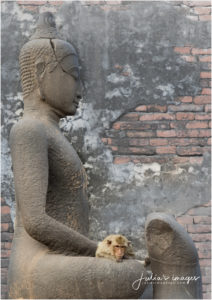 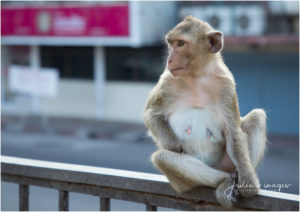 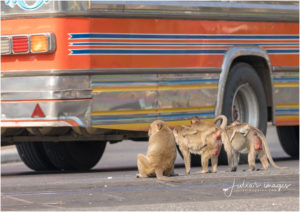 Monkeys have been tolerated and even welcomed in Asian temples for hundreds of years.  Around the temples of Lopburi, macaques were resident long before human settlement but in locations such as this, where cities have grown up around the temples, the monkeys can no longer retreat to the rainforest even if they want to.  As their numbers have increased their urban range has spread and they now live like street urchins in Asian cities from India to Indonesia.

One such temple in Lopburi is Prang Sam Yot, an iconic 3-pranged temple, built when the region was under the control of the Khmer empire.  Initially a Buddhist sanctuary, at some point in history it was converted into a Hindu shrine.  Hindus believe monkeys to be reincarnations of the celebrated god Hanuman, so they are lavished with food and offerings thus giving them no real incentive to leave. 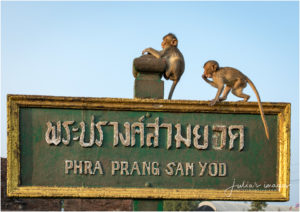 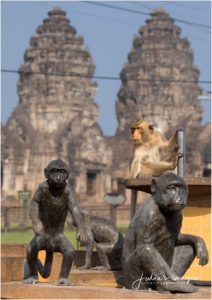 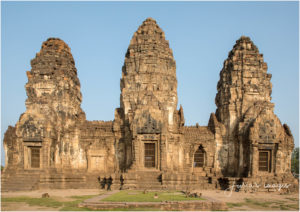 Most of the monkeys found in the Lopburi area are Crab-eating macaques, often referred to as Long-tailed macaques because their tails are typically longer than their bodies.  They are primarily arboreal, native to Southeast Asia and found in a wide variety of habitats such as rainforests, riverside forests and mangroves.  They also easily adjust to human settlements.

Some of the macaques in Lopburi are thought to be Rhesus hybrids as, in the past, it was common for local people to acquire young Rhesus monkeys as pets and then release them to the streets when they grew too big.

Despite their name, Crab-eating macaques typically do not consume crabs as their main food source but instead eat a variety of animals and plants.  In rural areas and towns they have become synanthrope, living off human resources and cultivated produce such as rice and other crops, often causing significant losses to local farmers.  In villages, towns, and cities where there is an absence of food resources, they frequently raid  grocery stores and scavenge from waste bins and rubbish tips.

For visitors such as ourselves coming to see the macaques in the temples, the messages are confusing.  Signs displayed on the perimeter fencing instruct people not to feed the monkeys and yet, just inside the entrance to the temple, there is a booth selling peanuts and renting out sticks to visitors so they can ward off any unwanted primate attention. 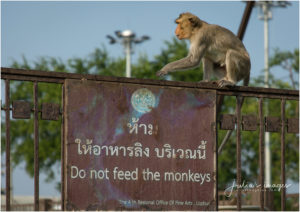 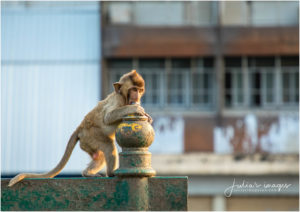 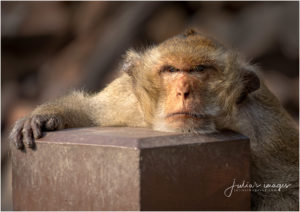 Each year, in November, the people of Lopburi throw a Monkey Party in the temple, where tables covered with bowls full of snacks are set out for the macaques to feast upon.  Unfortunately we were there too early in the month to see this but, by all accounts, it is quite a sight to see.

A downside of this tolerance is that the Macaques have become fearless of humans, which can lead to them directly taking food from people, both passively and aggressively – hence the recommendation for temple visitors to carry a stick.  For the most part though, they ignore visitors unless they believe them to be carrying food or some shiny items that they could acquire, such as sunglasses and cameras. 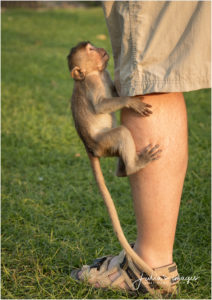 One thing that was evident though is that the general health of these macaques is suffering as a result of a diet comprising sugary foods, plastics and other trash.  Many were overweight or obese whilst others appear to have severe skin problems or tumour-like growths.  In the past, wildlife rescue groups have set up programmes to address the health and wellbeing of these primates but I have been unable to find information on any current initiatives. 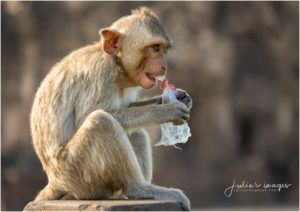 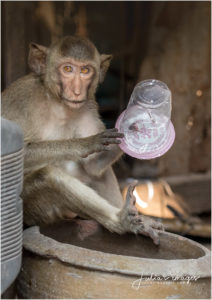 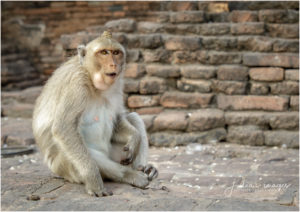 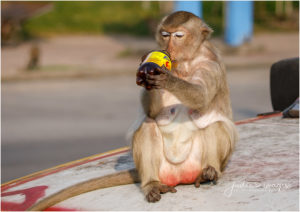 Macaques are known to be one of the best primate swimmers and, in the rainforest, will drop from trees into the water below to avoid predators such as clouded leopards and pythons.  In the grounds of Lopburi’s modern San Phra Kan Shrine a macaque version of tag was being played out around a water feature which they were using as a makeshift swimming pool whilst an overhead rope ladder (provided by the locals) made a great diving platform. 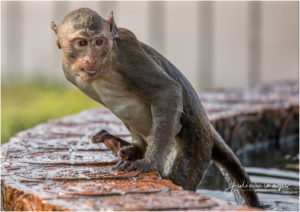 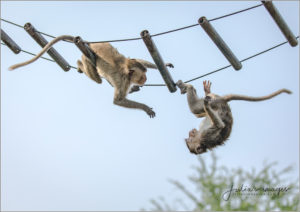 Across the rail tracks, not far from the temples, we passed shops where macaques hung around doorways, trampolined on shopfront awnings, climbed onto balconies and clambered over vehicles.  In some places metal shopfront awnings have been electrified to deter the macaques but with limited success.  Whilst the carrying of catapults and swatting poles to keep away overly curious primates is commonplace with everyone from shopkeepers to Buddhist monks, there also seems to be a perverse kind of reverence and appreciation for these rascally primates. 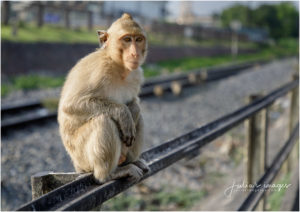 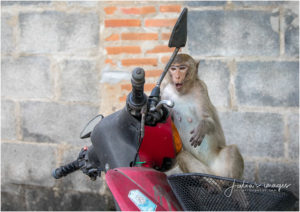 We followed a couple of macaques down an alleyway which lead us into a small shanty town occupied by locals.  Here macaques swung from suspended power cables, draped themselves over ramshackle wooden fences and socialised with the local dogs and cats.  With our guide acting as translator, we talked to one of the shanty town residents who seemed quite at home with his somewhat unusual neighbours.  He invited us to an outdoor seating area where we talked, photographed and watched the macaques scamper around.  Asked if he enjoyed living alongside the macaques the man smiled resignedly whilst shrugging his shoulders.  ‘I have no choice’, he said. 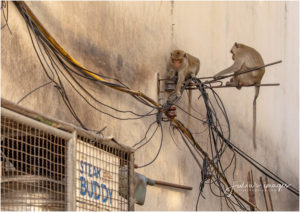 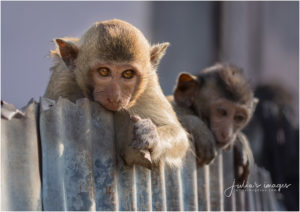 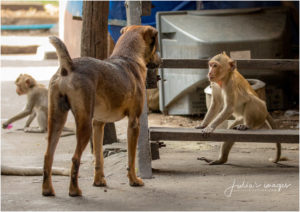 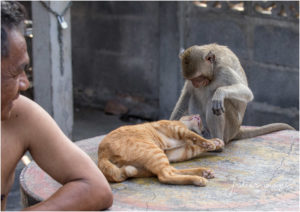 It’s true that his choices may be limited but there was no animosity in his response, just acceptance, and you were left with the feeling that he really considered them as part of his extended family, he has even gone so far as to give some of them names.  In a city with an estimated population of more than 1000 macaques that’s probably the most pragmatic approach.  It’s unlikely that these furry residents will be going away any time soon.